Another close final last night . Down to the last match on the night where Sai had to win in 3 games for an out right win but fell short loosing 2 games to 1 . 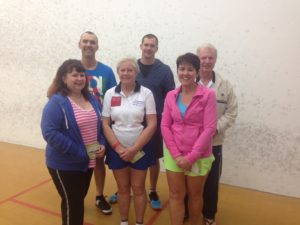 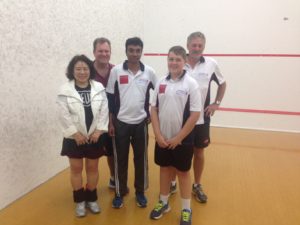 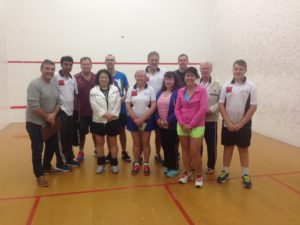 The grand final was closer than you think last night.

So much closer than it looks.

Update: Check out the photos below!

To celebrate the 25 year anniversary of Robina Squash Club, we’re pleased to invite past and current members to an evening full of great fun, excellent food and good company!

Parking: Hilton car park is located approx 30 meters along Orchid Ave on the left hand side. Turn left and descend down the ramp then turn right towards the hotel boom gate. Please retrieve ticket and proceed to level B2. Follow blue line on floor. Additional parking is on lower levels. Parking is free for this function.

PITS (Pass It To Someone) Game

Robina Squash Club was formed in March 1990 and this month we’re proud to announce that the club has been in continuous operation for a massive 25 years!

In that the time the club started quite small and steadily grew in numbers, utilising all four glass backed courts provided by Bond University and participated in inter-club competitions across the Gold Coast.

Over the last decade, Robina Squash Club hasn’t competed in inter-club competitions and has instead focused on a more social orientated club format using the two glass backed squash courts, which has been an inviting and helpful place for players of all ages and skills.

I’d like to thank everyone who has been involved with the ongoing operation of the club such as Phil Touliatos, Mark Cawthan, Paula Kimlin and a raft of senior members past and present including Murray Robinson, Peter Barr, Tim Brown, Karen Chan, Julie Free, Jo Carsten and many others.

It is through the help and support of the members of Robina Squash Club that we’re able to keep operating with low overheads, offering a fun and friendly environment each week to get out on the squash court and hit the balls.

Robina Squash Club Autumn grand final was played on the 5th August 2014 with Team 2 and Team 3 playing off for the coveted title.

All matches, games and points counted Team 2 were victorious on the night winning 11 games (219 points) versus 9 games (214 points).

Congratulations to everyone for another great final!

Robina Squash Club summer competition grand final was played 25th March and it was a great set of matches. Once everyone had finished, Team 3 and Team 4 were even on matches, even on games games and it went to a count back on points. In the end Team 4 won the competition beating Team 3, 225 points versus 207 points – nothing in it!

The Autumn competition teams and draw are being worked on currently, we’re hoping to make five teams of five people. This will see the return of one team being on a bye each week – nice for everyone to have a break every little while. As soon as it’s complete, the draw will be distributed on our normal weekly email.

After having the Bond University squash courts out of action and in maintenance between 13/8/2013 and 9/9/2013, as of Tuesday 10 September they are available once more for Robina Squash Club to use. 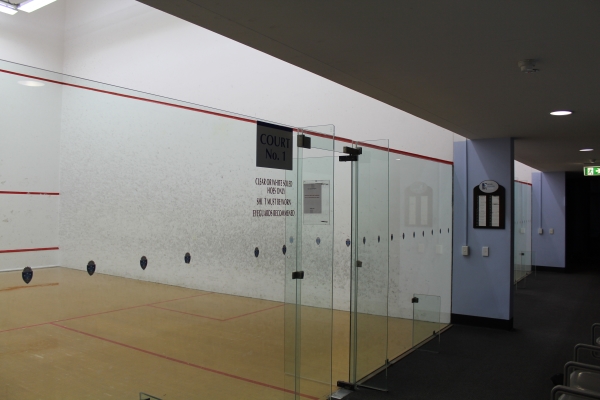 The floors have been resurfaced and repainted, they’ve now got a nice shine to them. Unfortunately the front walls were not able to be repaired at the same time, it is apparently a different group of contractors that repair the walls. As such, we’ll have to deal with the inconsistency of the couple warn patches on the front wall a little longer, it’ll keep everyone on their toes!

Bond University are performing maintenance on both squash courts between 13/08/2013 to 9/09/2013 where they’ll be resurfacing the floors of both courts.

It wasn’t specified but I’m hopeful that the front wall of both courts will also be repaired at the same time as they are quite damaged, fingers crossed!

Nerang Squash Club are going to host our club for the four weeks the Robina squash courts are unavailable. Weekly rosters won’t change during this window, just the venue and we’ll send out the normal weekly email over this period outlining the playing roster as well.

Robina Squash Club is joining the internet, hold onto your hats!

Given the prevalence of the internet today, it is clear that every business or quasi-business needs to have a home on the internet as it is ingrained into the lives of so many people, especially the habit of using a search engine such as Google to find information.

Without a properly functioning website in today’s day and age, businesses might as well be invisible to would be customers. This is highlighted clearly when Ed Parsons, a geospatial technologist from Google, stated at the end of 2012 that one in three Google queries have local intent – ie., people looking for information about things near where they are physically located.

Initial goals for the Robina Squash Club website is to act as an advertising platform for potential squash club members when they are searching in Google or Bing for a club to join on the Gold Coast but will hopefully be expanded out in the future.

Robina Squash Club run a social fixtures tournament with five teams, designed to let everybody have fun & enjoy the game of squash! Get in contact if you're interested in joining a team or putting your name down as a fill in.